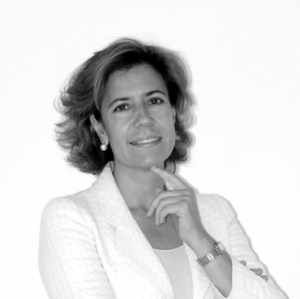 Before joining Leaders Trust International she spent fifteen years in several companies and positions including those as Sales, Marketing & Communication Manager and Country Manager in the IT, Retail and Insurance sectors.

Also related to Public Institutions, Sara was C.E.O of the Technological Park and Executive Vice-president of the Agency of Economic Development (Junta de Castilla and Leon, one of the autonomous communities of Spain), positions from which she significantly contributed to develop business in the region.

Vice-President of the French-Spanish Chamber of Commerce in Spain and Member of the Board.

Founder and President of ISOTES, a Spanish platform for “Women Talent”. Participated in the Women Leadership surveys with PwC “ Women at Executive Positions in Spain” (2011) and “Inspiring” (2014). Now writing a Manual called “Beyond the thirties”.

Sara is a member of the Industrial Manufacturing and Construction Practices and has been one of the founders of AltoPartners and an active member of the OCO until 2013.

She is fluent in Spanish, English, French and Italian.